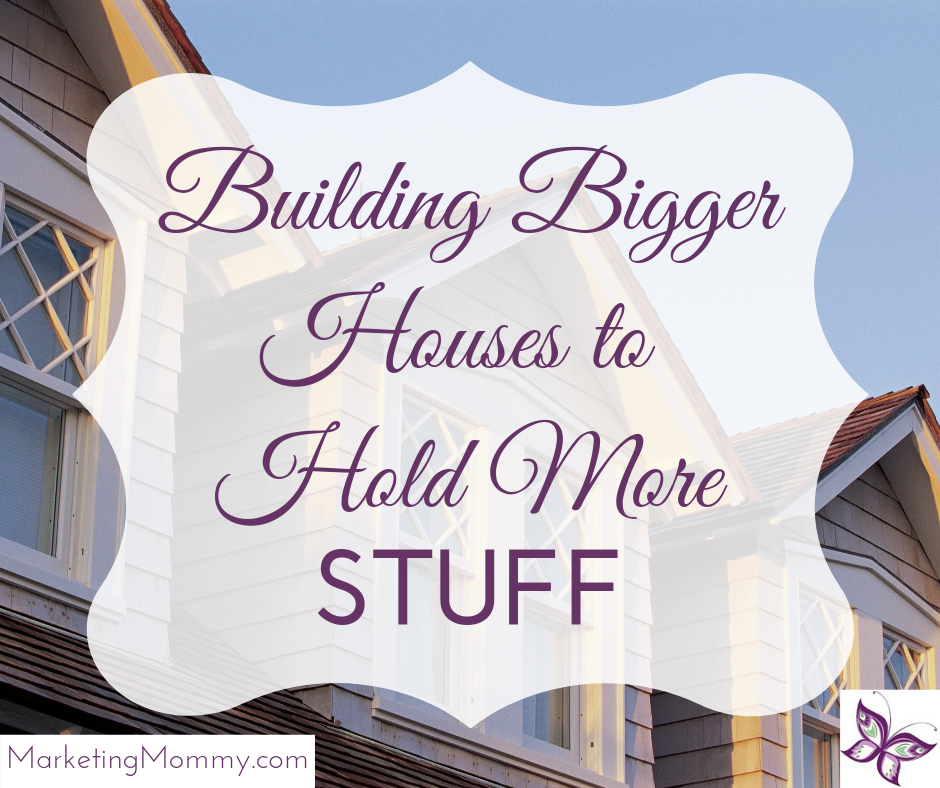 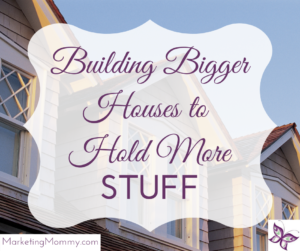 We were driving through an older neighborhood where the houses were a bit smaller. My daughter wanted to know why they ever built houses so small. I tried to explain to her how when those houses were built they didn’t expect children to play inside and kids didn’t own several rooms’ worth of toys. The concept was totally foreign to her.

Today we build homes with big living rooms to entertain and a separate family room for play. The family room needs to be big enough to fit our 60″ TVs and enough space to place the sectional couch an appropriate distance from the TV.

Today it is tantamount to torture to have children share a room (probably because there is so little space in the bedrooms thanks to all those toys). Homes must have enough bedrooms for everyone, plus home offices for mom and dad, either because we work from home or we can’t leave work at work.

These big homes are built on increasingly small lots, leaving little room for a yard. Kids don’t need yards though because they are spending so much time on video games, online games, or games on their mobile phones. 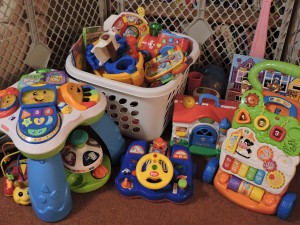 Even when I was a child (too many years ago to think about), this increase in child consumerism had started. McDonald’s was offering toys in the meals and the latest toys were being advertised on TV.

My kids see very few of these commercials as we tend to restrict viewing to channels that limit commercials such as PBS or Disney Jr. So I thought we might not have problems with the “I want that” syndrome. But on the rare occasion, they do see them, the begging begins for whatever weird light-up-wearable-pillow-pet they are touting.

I have told my kids that 100 years ago they didn’t have iPads or TV’s or online games, and those children were still happy and not incessantly bored. (Okay, I don’t use the word incessantly with them, but I was thinking it.) They look at me like I have two heads when I say that stuff.

Some of the brightest minds grew up without this plethora of stuff. Henry Ford, Albert Einstein, and Franklin Roosevelt to name a few. Not that we don’t have incredibly smart people now. Steve Jobs, Jeff Bezos, and Sergey Brin come to mind.

But do our children need all this stuff to be happy; to grow up to be intelligent, well-rounded people, and to make a valuable contribution to the world?

Is it Real or is it Marketing?

Who taught our kids that they need all this stuff? Marketers. After all, that is their job, to build a relationship and connect people with things they want. And in some cases let us know what we could want.

There are studies about the effects of marketing junk food to kids, and others on the best way to reach kids. Marketers know that kids have influence over the buying choices their parents make.

These measures were designed to keep kids safe. But even with added educational content, kids still watch shows with commercials or see ads while playing their favorite game on an electronic device. 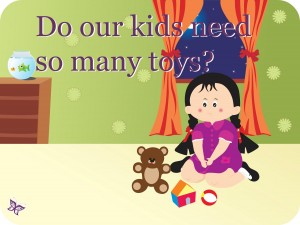 So what’s a parent to do? We know our kids best. We know how much screen time they can have before becoming zombies, or how many toys they actually play with versus how many they say they want.

I encourage you to listen to your intuition and when in doubt, wait, or say no to their requests. How many times have you bought an expensive toy and then found your kid playing with the box it came in instead? I would recommend erring on the side of less rather than more. Remember that today’s status quo of home size and their contents is severely out of proportion compared to historical levels.

In order to grow and thrive as human beings, none of us need all that stuff. Is it nice, is it comfortable? Sure! But necessary? Nope! I’m not one to endorse minimalism, but I do think we need to have a reality check every once in a while, and our kids, need us to teach them to do that for themselves.

How big is your house? Do you live a minimal life? Or is your 2000 sq. foot house over-flowing with stuff you don’t need and never use? What steps can you take to teach your kids about wants versus needs?